I am so close to the final draft of my memoir “The Bipolar Writer.” I want to share in two parts of the first chapter of my memoir, and today is part two. All About James – Part One

In the past, I have shown chapters in different parts of the process. This first chapter is so important to my memoir that I wanted to share it so that feedback is possible. It is perhaps my most polished and most worked chapter, that is not to say it is perfect (I am still considering having a few people look at all the chapters together when you are close to project you can miss things.) With that said this will be a real and raw look at James, the early years leading up to my diagnosis.

Who is J.E. Skye? The Origins of The Bipolar Writer

I got back on track in a big way my junior year of high school. My grades got back to their normal levels. It helped that I had become a part of a group organization (my local sheriff explorers) that took up so much of my time during the end my sophomore year. It became a place where I belonged, and I did belong at some level. The truth is that as much as I belonged, I was an outsider because I was very manic at this point in my life. I can look back to the long hours spent at events and ride-along with a deputy sheriff’s as a sign just how manic I really was at this point in my life. (I will explain more about this time in a later chapter.)

By my senior year, my depression became a significant part of my life again, but this time it hurt less to miss a ton of school this time around. I won’t lie, it came down to the wire if I would be able to graduate, but I figured it out. It wasn’t that I was smart. It has always been the opposite. I was barely trying when I was lost in the endless depression.

My senior year was the first time that I can say that I went through my first real depression cycle. It started early my senior year and lasted all the way to well past when I graduated high school. I began to spend days at a time laying in bed lost in the endless darkness that was my depression. It was a strange place to be, and I had no idea that there was something really wrong with me. 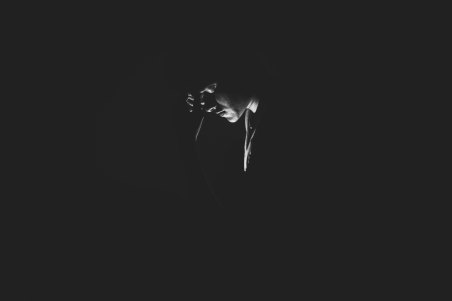 That feeling of darkness would become a familiar part of my life in the coming years. I had taken an introductory psychology class in my junior year of high school. I knew at some level what depression does to a person, and what it can do. My knowledge was only at the textbook level, and truthfully, I was in denial that something was wrong. I even thought that it was possible that I was Bipolar at one point as a teen, but I laughed it off as something that people do after taking a class in psychology. Self-diagnosing is never a good thing I shook it off as a ludicrous idea. I continued to struggle.

It was a year after graduating from high school that I was able to break out of my first depression cycle. I started working for my dad part time, and later I found my first job. Things got better after securing my first job. I was an adult finally, and there was so much to look forward to in my life. But my journey and its beginning is not a happy one as I would learn.

Between my first job and my first suicide attempt was the first time that my manic side was at its most evident. In the past, my mania was mostly being overly productive and spending days at a time without sleep. My thoughts would race, but I would find comfort in staying busy. The manic episodes of my life are still hard to write about because I have never fully understood my mania. I could always deal better when I am manic. The signs were there that I was Bipolar, and it is no wonder my diagnosis became Bipolar One.

My manic episodes are exciting to look back on because I had no idea they were symptoms. My mania would last for days. I would go four or five days with no sleep. My energy levels would go through the roof to a point where I would go for walks or drive for hours. I had too much energy to sit still. I would feel restless the less sleep I would get, but it didn’t bother me. I could drive four hours in any direction and then go right back without pause.

I would take unwarranted risks like driving down the highway at 2 am at 100 miles an hour in my car. It gave me more energy the more reckless my behavior became, and it was a great feeling to “feel real” for the first time in my life. It was a lie because it was just the mania taking me over. I didn’t have to hide who I was in a manic episode, so it never really registered as an issue like depression has over my life.

One of the worst parts of my manic episodes during the early years was the excessive spending sprees. Some of my worst events featured me spending hundreds of dollars in one store on electronics and DVD’s only to pay as much in a different store on the same day. I would spend every dollar I had and then ask others like my family for money. I had no regard for money and savings. I ran up every single one of my credit cards when I was manic because it helped me “get through” not sleeping. I had no idea that these behaviors were terrible for me, looking back at the moment can you blame me?

I can see the mixed episodes before my diagnosis as some of the worst parts of myself. There were still days where I did nothing but lay in bed, and then go on a reckless spending spree the next day. It became so bad at one point that I had to take time off from work for six months just to keep myself from going so far into debt. I didn’t know which way was up. I talked fast all the time. When I was in a manic episode, my thoughts were often jumbled and incoherent. My mind would be racing at a million miles a minute. I was quick to anger and reckless behavior.

It came to a point in my adult life where in May of 2006 I walked into my boss’ office one morning and quit my job. It was sudden. My family had their reservations about my someone leaving their job in that manner. It had a deeper meaning that no one saw at the time. They had no idea the dark thoughts that were going through my mind. It was the start of what would become my long journey, but I was not there yet. It was over a year and half of not working and pretending that I was looking for a job. The reality was that most days I could not find the strength to leave my bed. The darkness of depression was looming over my life, and I was on a collision course with reality.

I know to look back that there were many signs that I should have gotten help, but life is never so black and white. Thinking about that time in my life I was young, and there was a real stigma about mental illness that it was “bad” or “outside of the social norm” to have a mental illness.  It played a part in why I never sought help until it was too late, but in truth that is an excuse. There was enough information out there for teenagers dealing with my depression, but I was in denial that there was something wrong, it was just easier to deal with in my head.

On a cold night in November 2007, my life changed forever.